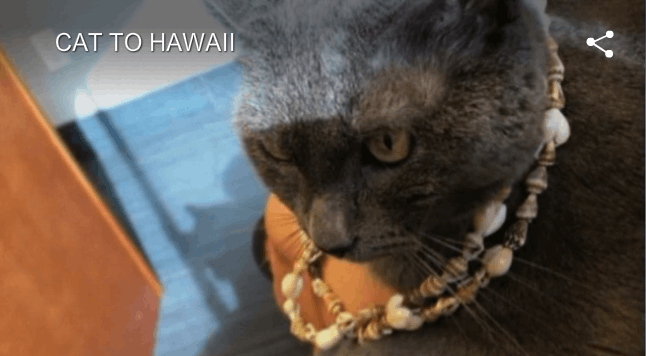 Ninja Movers are always careful about what we pack, but even we’ve had the occasional packing error. A few full trash cans have been packed (one man’s trash is another man’s treasure), but I can say with full confidence that we have never, ever packed a pet. Unfortunately, that did happen with one move, but the results, which could have been disastrous, were miraculous.

In September, the Barth family moved from Long Island to Hawaii. Shortly after the movers left, the Barths noticed that their cat, Mee Moowe, went missing.

“I was really worried and starting to think the worst,” Barth said. “Maybe she ran away, maybe the movers scared her and she decided it was too much noise and she took off.”

They stayed behind looking for Mee Moowe as long as they could, but eventually, they had to leave.

Hawaii moves are a bit different from Continental U.S. moves in that the movers need to cross an ocean, which considerably slows down the process. It took 36 days for the Barths belongings to arrive in Hawaii and when they started to unpack, they heard a faint “meow.”

Mee Moowe had been packed into one of the boxes. She wasn’t healthy after more than three months with no food or water. Her eyes were crusted shut. She was anemic and dramatically thinner, but she had survived.

Mee Moowe is doing better, but she’s not completely reunited with her family yet. She was supposed to receive shots before moving to Hawaii and since she didn’t, she’s being quarantined at a veterinarian’s office at a cost of $4,000.

The moving company’s name hasn’t been released and they haven’t yet commented, but I can assure you that stories of pets accidentally being packed and moved are very rare.

For now, though, we’re just delighted that the Barth’s kitty will soon be joining them in their new Hawaiian home.

To prevent possible mistakes, including the far more realistic possibility that a pet could slip out the door during the move, it’s usually best to have pets stay with friends or family.